Blackbird Spotting: How the SR-71 Gave the U.S. Intelligence Superiority

This article appeared originally on InSpaceNews.

As a military brat, I’ve seen stranger things growing up on military bases around the world. Few experiences topped the first time I saw the ultra-secret SR-71 Blackbird. My Father, a young Navy lieutenant commander, was operating the range and flying search-and-rescue while stationed at Naval Air Station Fallon, Nevada. Situated a few hours east of Reno, Nevada—Fallon sits at the edge of one of the most desolate deserts in the United States. Today, it serves as the air base for Top Gun after relocating in the 90s from NAS Miramar, near San Diego. Immortalized in the ’80s Hollywood blockbuster of the same name — the dogfighting sequences were filmed over the barren canyons and dry lake beds that serve today as a tactical flight training and bombing range.

The SR-71 would make refueling stops at alternate air bases if there was inclement weather at Beale AFB or mechanical issues. And Fallon provided enough seclusion to accommodate. The SR-71 was the most advanced and secretive military jets in aviation history. The original version, the A-12, was first developed for the Central Intelligence Agency.

Commissioned by President Eisenhower in 1957 for development during the height of the Cold War, Lockheed Martin, the Department of Defense, and CIA went to great lengths to maintain the secrecy of the SR-71. Once operational in 1962, the A-12, which transitioned into the SR-71 Blackbird, gave the US an insurmountable intelligence advantage over the Soviet Union and Eastern Bloc during the Cold War and its technological learnings informed future space launches and recoveries. Simply put, nothing in the sky flew faster or higher than the Blackbird, which at the time, became legendary as a source of mounting frustration amongst the Soviet military brass. There was no greater prize than shooting down a Blackbird. 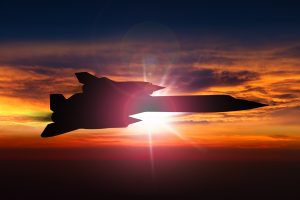 As a young child, my Father, still in his flight suit, came bounding through the door at dinner time one evening. There was no time to explain as he rushed my brother and me to his pickup truck. After being waved through the security gate, we arrived at the tarmac of the airport tower and hurried inside. We made it to the secure door, where behind it was the narrow corridor and steep metal steps, ascending into the 360-degree-view of the NAS Fallon control tower. Before we went in, my Father let it be known that we were to pay attention, be quiet and that what we were about to see was “classified.”

I visited the tower many times before, but this was the first time it was preceded with suspenseful caution. The interior of the control tower was bathed in low lights emanating off the radar and control screens against a backdrop of the disappearing sun over the Sierra Nevada mountains. We waited…

The controllers were all business as they looked through binoculars to a closed hangar at the south end of the runway. Once sufficiently dark enough to evade Soviet satellites, the controller subtly relayed clearance. Normally, the tarmac was full of lights and the skies were buzzing with military aircraft, but this night, the airspace and tarmac were eerily tranquil.

At the hangar, the lights were off, but there was enough twilight to see the massive doors open. A tow vehicle pulled forth the pointed, sleek nose of an SR-71 Blackbird. The long arrow-shaped exterior, massive engines, and angled stabilizers were slowly revealed. The black titanium-composite skin seemed to absorb any remanence of the remaining light.

The blackbird was positioned at the furthest end of the runway—no doubt to give it every inch of ground. There was no other clearance given by the tower. The blackbird owned the runway with impunity. The twin Pratt & Whitney J58 engines, which were capable of over 3k pounds of thrust, burst on, projecting two massive rooster tails of after-burner flames that vectored into fine narrow points, illuminating the desert behind it.

The SR-71 roared to life. It was clear that the mission was to get airborne and clear of any surveillance as fast as possible. The pilot rotated off the runway and nosed up ever steeper as the blackbird accelerated, like a rocket, as the blue hue of its afterburners dissolved against the fading twilight in a matter of seconds.

Afterward, I wanted to learn everything I could about the SR-71, but little information was available to the public. It would be a decade before I saw another blackbird in action as one descended out of the sky for a practice approach to NAS China Lake, California, only to pull up, near vertical, and climb out with full afterburners. This was in the afternoon in the mid-80s for everyone to see, and by then the blackbird was well-known and coming into its final chapter of service.

Although the SR-71 program didn’t officially end until 1998 for the Air Force and in 1999 for NASA—in 1990 the last operational blackbird from the 1st Strategic Reconnaissance Squadron flew a retirement flight from Los Angeles to Washington D.C. in a little over one hour. Today, it resides at the Smithsonian National Air and Space Museum’s Udvar-Hazy Center just off the south end of Dulles airport in Chantilly, Virginia.

How the Blackbird Changed Aviation

Since the advent of human flight, there have been incredible engineering milestones that vastly accelerated the aerospace industry—with the SR-71 Blackbird occupying a prominent place in history. What made the SR-71 so special was how incredibly advanced all facets of its engineering was the time.

It was first envisioned over 60 years ago to exceed 80,000 feet in altitude and fly at speeds greater than Mach 3. Eisenhower was still president when in 1957, Lockheed was approached by the Central Intelligence Agency to develop a spy plane that was nearly undetectable—and if it were to be detectable—it could still outrun any air defense system in the world. Think about this. Forty years prior, the U.S. military was using live pigeons with strapped-on cameras to gather aerial intelligence during World War I.

Originally intended for the CIA, the government wanted a high altitude, global-range reconnaissance jet that was fast enough to make an enemy surface-to-air missile look like a bottle rocket in comparison. Preceded by the highly successful U2 reconnaissance program, military leaders knew it was only a matter of time when enemy forces might be able to shoot down the slower spy plane.

Their fears were realized when in 1960, Gary Powers was shot down in his U2 and captured by the Soviets. The U.S. was only two years away from testing the first A-12. So secretive was the program, it first flew at Groom Lake at Area 51, and became the origins of many UFO sightings around the desert southwest. 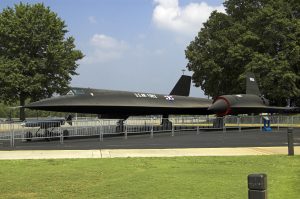 Located in the high desert of Palmdale, California is the famed, Lockheed Martin Skunk Works site. Once an isolated area north of Los Angeles; Skunk Works was home to some of the leading minds and engineers in aerospace. Having produced the U2 spy plane in secrecy, Skunk Works went on to create the SR-71 program essentially from scratch. Each of the iterations in technology and testing informed next-generation of record-breaking aircraft including the F-117 Nighthawk, F-22 Raptor, and the F-35 Lightning.

In the case of the SR-71, the engineers were tasked with designing a new aircraft without the benefits of a primary predecessor aircraft. To build a reconnaissance vehicle that could exceed Mach 3, engineers were essentially starting at the drawing board. They needed to develop a heat-resistant skin to protect from the intense atmospheric friction that would burn up any other plane. And the shape of the aircraft needed to have a low cross-section profile to limit detection by enemy radar. According to its chief designer, Kelly Johnson, “everything had to be invented”

The Unique Aspects of the SR-71

The fraternity of blackbird pilots began with a small group of test pilots. As the SR-71 program expanded, highly rated USAF pilots were selected for training and assessment by senior fellow pilots.

Just because someone was invited into the program, passing the grueling flight assessments was equaled by the rigorous interpersonal reviews of senior officers. Ultimately, it was the ranking pilots themselves who chose a rare few to continue on. When a pilot was selected, a small black silhouette of a blackbird was sprayed on the concrete outside his base housing by fellow pilots in the middle of the night. It was a crude, but a coveted invitation.

“At 85,000 feet and Mach 3, it was a religious experience. Nothing had me prepared to fly that fast… My God, even now, I get goosebumps remembering.”

The pilots formed a tightknit community. They were some of the Air Force’s top pilots—capable of flying a notoriously challenging aircraft and with incredible endurance, tucked into what essentially were full-pressure flight suits, which were needed to sustain the pilot and RSO flying in the upper reaches of the stratosphere. With a cockpit barely larger than the pilot, the SR-71 required high-character personnel who could maintain the covert nature of the missions.  Sharing details of missions with friends and family were off limits. 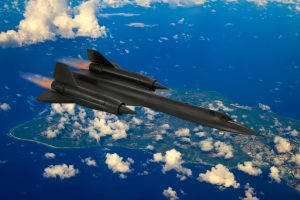 The overall accumulation of intelligence that SR-71 pilots amassed was vital to U.S. Cold War strategy. Although the SR-71 never carried a weapons payload, the intelligence it gathered was both devastating and embarrassing to Soviet military leaders at a time, back when satellites couldn’t obtain the same level of detail, clarity, and volume of detailed imagery than the under-belly imagining equipment that the blackbird possessed.

Any loose discussions at home about where a mission took place, the mechanics of the plane, or benign design details could have potentially helped the enemy obtain another piece of the puzzle to create an effective anti-aircraft system or recreating a similar spy plane for themselves. The fact that never happened is a testament to the courage and professionalism of the pilots and engineers who developed the incredible, SR-71 Blackbird, which flew into my imagination many decades ago and has never left.

Humility and Science as Essential Bedfellows

How the Increased Application of Digital Twins Advances R&D