How can departments analyze this data to help them determine and implement strategies to attempt to reduce the number of duty deaths?

First of all, it’s difficult to get a comprehensive picture of duty deaths because each reporting agency categorizes them differently. The data below came from several sources in order to analyze law enforcement duty deaths over the past decade.

There are some interesting statistics on when duty deaths tend to occur. For example, in the past decade, more incidents that resulted in felonious fatalities occurred on a Thursday. However, the fewest number of felonious incidents occurred on Tuesdays.

Historical statistics show that New York City has the most duty deaths than any other department, with 698. The State of Texas has lost more officers than any other state with 1,678 deaths. On the other end of the spectrum, Vermont is the state with the fewest deaths, with 22 officers killed.

However, these statistics remain incomplete because they ignore the leading cause of police deaths: suicide. 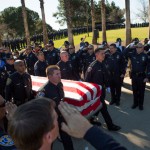 These numbers are alarming, and to study the problem takes the courage to accurately report and categorize any law enforcement death. An officer who is suffering from depression, post-traumatic stress disorder (PTSD), or another mental-health diagnosis that leads to the officer taking his/her own life, needs to be studied so proactive intervention and treatment strategies can be developed to try and prevent this tragedy from occurring. Misclassifying these incidents casts inaccuracy on the actual duty death numbers in law enforcement.

I believe it is a disservice to the profession to ignore the deaths of these officers by not including them in any meaningful analysis. Timely and accurate reporting on law enforcement suicides needs to be established. It is time to add two additional categories:

Taking care of the fallen and learning lessons from their deaths makes the profession stronger.

If you are concerned about a fellow officer, please take a moment to read Silent Suffering: Warning Signs and Steps to Prevent Police Suicide to learn more about ways to identify and prevent suicide. Remember, preventing police suicide is every officer’s responsibility.

About the Author: Mark Bond worked in law enforcement and has been a firearms trainer for more than 29 years. His law enforcement experience includes the military, local, state, and federal levels as a police officer and criminal investigator. Mark obtained a BS and MS in Criminal Justice, and M.Ed in Educational Leadership with Summa Cum Laude Honors. As a lifelong learner, he is currently pursuing a doctoral degree in education with a concentration in distance education. Mark is currently an assistant professor of criminal justice at American Military University &American Public University and is one of the faculty directors in the School of Public Service & Health. You can contact him at Mark.Bond@mycampus.apus.edu.

References used in this article came from the following sources: