Container trucks drive along a pier at the Port of Taipei on October 9, 2012. Taiwan relies heavily on exports and trade with China. (Mandy Cheng/AFP/GettyImages)

U.S. Treasury Secretary Steven Mnuchin may soon visit Beijing to help settle a ballooning trade dispute, Chinese officials and their media said Monday. New import tariffs, as the plans are drawn now, would hit 1,333 Chinese goods headed to the United States and at least 106 high-value items from the United States destined for China. U.S. President Donald Trump alleges that China has been an unfair trader.

Should the secretary swing through Malaysia and South Korea too? They stand to be affected by a Sino-U.S. trade war if one breaks out. China and the United States as the world’s two biggest economies can easily change the course of smaller, trade-reliant countries through actions not expressly aimed at them.

More on Forbes: The Trade War That Wasn’t: Tit-For-Tat Tariffs Are Unlikely To Have Any Real Effect

“The effects of a full-scale U.S.-China commercial slugfest would be global,” says Scott Kennedy, deputy director of the Freeman Chair in China Studies with the think tank Center for Strategic & International Studies. “Companies the world over are embedded in supply chains that run through China.”

Here are four places that would be particularly shaken by surges in tariffs:

A trade war might generate excess product capacity and inventories in China as well as the United States. Producers from either country would look for other places to “dump” their goods, says Stuart Orr, professor of strategic management at Deakin University in Australia. Soy beans are one such product. If they flooded the world market, other countries that already sell it for global consumption would face sudden competition, Orr says. The most likely third country: Brazil. The South American nation produces 30% of global supplies, second only after the United States. China is in fourth place.

This Southeast Asian country has historically depended on exports of crude and palm oil. But the $341 billion economy rests now as well on exports of electronics, machinery and their parts to both China as well as the United States. Malaysia’s top export to both last year was electronics circuits and parts, according to data compiled by Moody’s for this post. Those goods risk impacts from Sino-U.S. trade restrictions, says Joy Rankothge, a senior Moody’s analyst in credit strategy and research. Presumably Chinese or American firms would reduce orders or ask for price cuts. 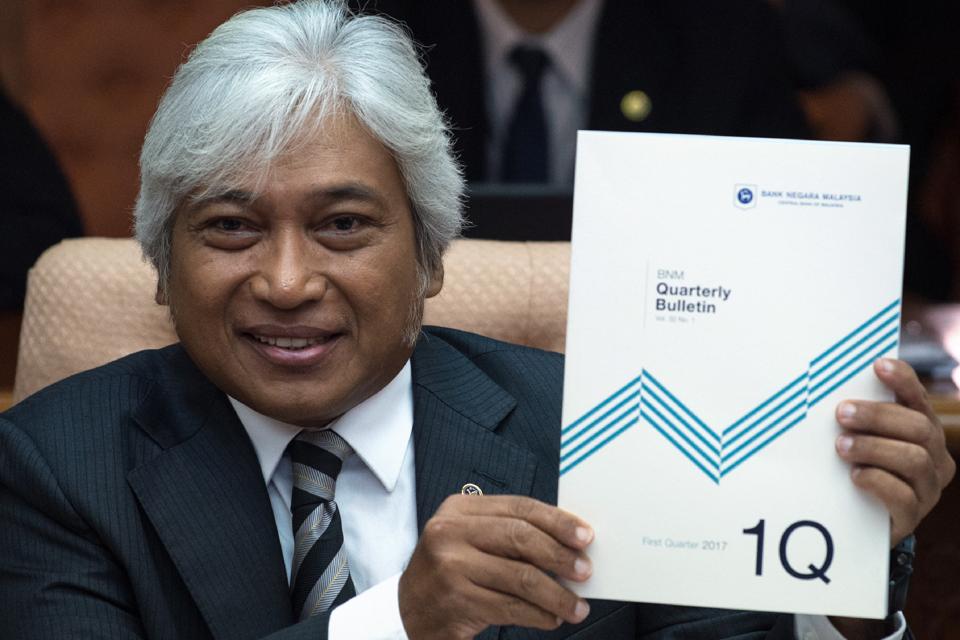 Malaysia’s Central Bank Governor Muhammad Ibrahim shows a copy of a report showing the first-quarter GDP growth results at the Bank Negara offices in Kuala Lumpur on May, 19, 2017. Malaysia’s economy grew at its fastest pace in two years during the first quarter of 2017, the central bank said, boosted partly by a pick-up in exports. (MOHD RASFAN/AFP/Getty Images)

The value of Korean semiconductors shipped to China would fall by $4 billion per year if Sino-U.S. tariffs kicked in, this news report suggests, citing estimates from the Korean research organization Institute for International Trade. Memory chip makers Samsung Electronics and SK Hynix might suffer the same way, the report says. “If protectionist measures were to significantly and durably weigh on global trade…trade-reliant economies like Taiwan, Korea or Malaysia would be affected,” says Marie Diron, managing director of the Sovereign Risk Group at Moody’s.

Taiwanese manufacturers ship tech hardware parts to China for final assembly – or do the assembly there for re-export. Solid-state drive manufacturers such as Lite-On and PC monitor builders including Foxconn Technology (Hon Hai Precision) would pay more to ship into the United States due to their production bases in China and are mentioned on Washington’s list of tariffs, says Sagitta Pan, senior industry analyst with the Market Intelligence & Consulting Institute in Taipei. But drive makers can transfer assembly and production lines back to Taiwan, Pan says, while monitor builders could shift production to third countries.

This article was written by Ralph Jennings from Forbes and was legally licensed through the NewsCred publisher network. Please direct all licensing questions to legal@newscred.com.

Iran tests missiles under apparent watch of US nuclear sub